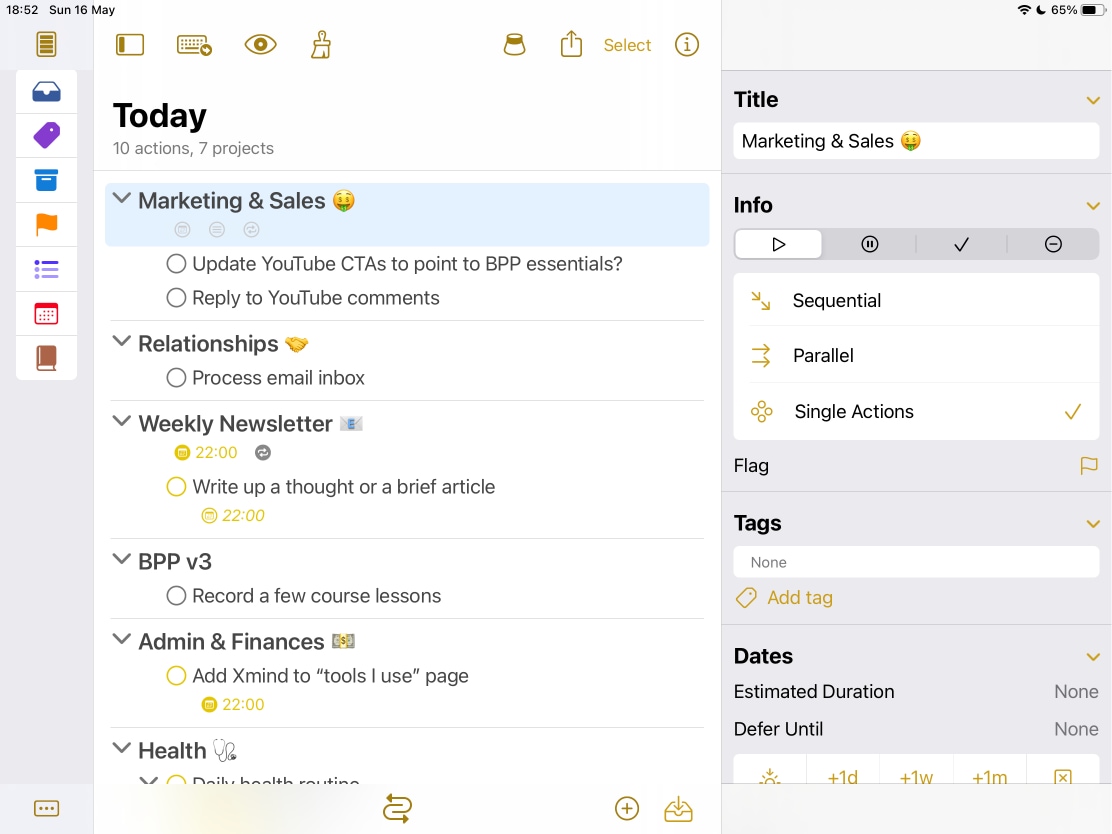 OmniFocus has a special place in my heart. I first started using it in 2011 and over the years it has helped me complete countless projects. But recently, I’ve felt that OmniFocus has lagged behind. Its user interface is outdated, particularly on mobile. The information density is high, which puts off people new to OmniFocus. And there’s one big missing feature.

Now the Omni Group has released a beta version of OmniFocus 4 for iOS and iPadOS. Does it address these concerns? Is it a major improvement over OmniFocus 3?

In case you’re new: I’m Peter and I help people to be more productive, particularly with task managers such as OmniFocus. I even offer a video course, Get Stuff Done with OmniFocus 3.

Anyway, let’s discuss the beta version of OmniFocus 4, which is currently available for iOS and iPadOS. Note that this is a beta version, so the app will probably be polished before the final release. Still, we can evaluate its progress. Before we do that, though, let me list what I like and don’t like about the current OmniFocus version—OmniFocus 3.

First, its user interface is outdated, particularly on iOS and iPadOS. The app simply looks old. The information density is very high. And OmniFocus feels overwhelming, particularly for new users, but also for experienced people such as myself. It takes too much time—and too many taps—to add a task to OmniFocus on iPhone or iPad.

Second, there is too much friction in basic tasks. When I open OmniFocus, I want to immediately see my “Today” list. The vast majority of the time, I’m not interested in what I’ll be doing tomorrow. I can build a custom Today perspective, but that has its limitations and creates a steep learning curve for people new to the app.

So, does OmniFocus 4 address these points?

Well, let’s first review the new OmniFocus 4 features that the Omni Group highlights on its blog:

It’s great that Focus mode is now available on iPhone and iPad. Focus is a useful OmniFocus feature that lets you see only those tasks and projects you want to see. So this is a solid improvement.

It’s also nice that Quick Open is now available for iOS and iPadOS is nice, although in practice I rarely find myself using Quick Open. But I’ll call this a solid improvement too.

That leaves the redesigned inspector, the redesigned navigation view, and inline editing of tasks. These all come down to this question: what is the OmniFocus user experience like now, on iPhone and iPad?

Certainly OmniFocus 4 looks prettier than OmniFocus 3. But it still doesn’t look modern. The app still looks like a database. Compare that with the design of Things 3. The Things design is from 2017, but looks cleaner and makes better use of space.

I mention Things 3 because I consider it to be OmniFocus’s biggest competitor. OmniFocus has many things going for it compared to Things, such as support for custom perspectives, sequential projects, attachments to tasks, and location-based notifications. But in terms of design, the OmniFocus design of 2021 isn’t as good as the Things design from 2017. I find that disappointing.

And Things 3 isn’t the only app that looks nice on mobile. Sorted 3 is another app that looks great. Todoist looks decent. Even Microsoft To Do looks better than OmniFocus. Are these better task managers than OmniFocus? No, but they demonstrate that better design is possible.

Okay, so OmniFocus 4 probably won’t win any design awards. What about the information density—has that improved? Honestly, not much. OmniFocus 4 still feels overwhelming. Yes, you can set up custom perspectives and use the Focus feature, but even so, I wish OmniFocus gave tasks and projects space to breathe. As for the inspector, that’s an outdated concept altogether. Apps like Things 3 and Sorted 3 demonstrate that you can manage all the properties you want without needing an inspector that takes up a huge chunk of the screen.

Does it take fewer taps to get places in OmniFocus 4? It does! There is legitimately some improvement on that front. Navigating OmniFocus 4 on mobile is easier now. I wouldn’t say it’s great or even intuitive—try reordering projects or folders and see how clumsy that still is—but it’s much better than before.

Next, we get to my main concern with OmniFocus. There still is no built-in way to say, “I plan to do this task on Tuesday”. You can set a task’s due date to Tuesday, but that’s not the same. The due date is when a task absolutely needs to be done. Usually, you’d like to complete it before that time. It’s such an intuitive concept: when do you plan to work on a given task? We all think this way, all the time.

There is a workaround to kind of replicate this functionality in OmniFocus, which is setting up a so-called “next” tag. Such a tag lets you mark which tasks you’d like to work on “next”, even if they’re not necessarily due soon. You can set up the Forecast perspective to show tasks with this tag under Today.

But this workaround has limitations. For example, what if you want to schedule a task for two days from now? You can defer it until then and apply the “next” tag, so that the task will appear in your Today view two days from now. But in the meantime, you can’t see the task; it’s deferred and will be hidden from many views. There is a workaround for that too, but that workaround has its own drawbacks.

Don’t get me wrong. OmniFocus is still a great task manager. In fact, it’s my second-favorite task manager, right after Things 3. I consider all other task managers to be substantially weaker. But OmniFocus has so much more potential.

And in the end, that’s where I land. OmniFocus has a really solid foundation, but it needs a better design and support for scheduling tasks. It’s becoming more difficult to recommend OmniFocus to people who are new to task management, simply because it doesn’t look pretty and isn’t as intuitive as competing apps.

If that sounds like you, but you haven’t been able to make it work for you, enroll in my course Get Stuff Done with OmniFocus 3. You’ll learn how to set up the app in a way to maximize its strengths and minimize its weaknesses, so you can get more done with more ease. There are no workflow changes between OmniFocus 3 and 4, so all course concepts are applicable to OmniFocus 4 as well.

Join the 3,500 people who love my newsletter